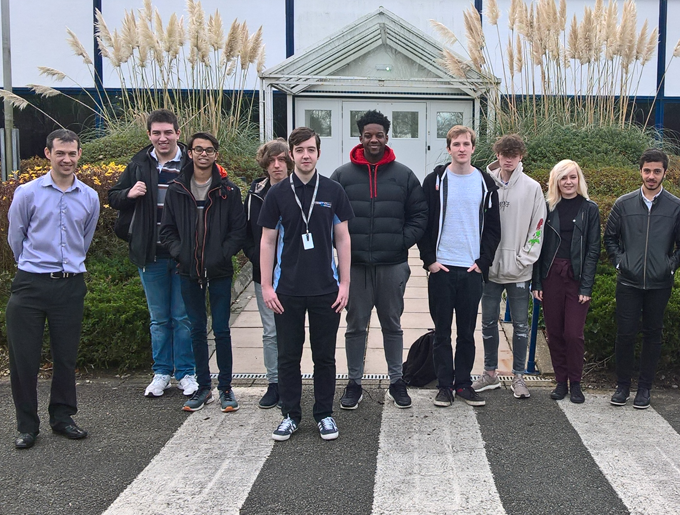 Thanks to the internet, you can now book a holiday, order a pizza, compare car insurance prices and catch up with your friends via social media.  All within a matter of minutes and accessible however you want, whenever you want.

It’s so convenient, yet have you ever wondered about where these services that “magically” appear on your screen, actually come from? And what infrastructure, technology and people are involved “behind the scenes” to help ensure online services such as those mentioned, are available to you 24/7 365 days a year?

On 6th December last year, ten lucky Level 3 IT students got the chance to see for themselves first hand, with a trip to local Milton Keynes datacentre operated by Nuco Technologies Ltd. Shown around by current IT apprentice Ryan, one of the students on the trip, Peter Boyd, told us about his experience:
“The first sign that security was a huge priority at the datacentre was the two sets of huge gates we had to get through just to get to the car park. Upon entering the building everyone had to sign a small slip that would become their ID badge for the day, and we were told no photos could be taken of anything on the tour. Another thing that showed the level of security they needed was that they had a "man trap" to only allow one person into the server areas at a time. This took about five minutes for all of us to get in and out. It was also very interesting to learn about how the facility was specifically designed and built for physical data protection ranging from floods to external blasts.”

To bring into perspective how much power each rack of servers use, our guide gave us the example of a domestic electric oven. The amount of power used by a single rack of servers in the facility is equal to that of several electric ovens being continuously run 24/7, and the current power usage of the whole facility is equal to that of several hundred electric ovens being on at the same time.
Throughout the tour the guide showed us the amount of resiliency that the Tier4 specification site has, including dual diverse internet connectivity, dual air-conditioning systems, dual UPS’s, dual transformers, diverse power feeds, and dual generators, all designed so that there is no single point of failure within the infrastructure that may prevent website servers from running and being accessed online. Finally it was enlightening to talk to the apprentice they had, and find out about his personal experience in working at the datacentre to help broaden our understanding and options for possible careers.”

The tour also included the data halls, comms rooms and some of the plant rooms (UPS and generators). Students were also able to ask questions to the current Apprentice Ryan, finding out what life at the company is like, as well as the transition from student to full time work.
Andrew Willis, Managing Director at Nuco Technologies Ltd, who took the students on the tour believes that it’s important for young people interested in IT to gain an understanding of the important role datacentres play in the availability of online services used by people around the world. “Hopefully the tour has shown how servers have to be constantly powered, connected, cooled and protected, and that’s before you even get into the networking and administration side!”

Andrew also answered questions from the students about the company, which provides business class website hosting and internet related services to organisations of all sizes within the private and public sectors.

This was a brilliant and rare opportunity to go behind the scenes, and Milton Keynes College would like to thank Nuco Technologies for the opportunity.
Interested in taking on an Apprentice, or becoming one yourself? You can find all relevant information here.
Categories: #apprenticeships, #MKCollege, #GuestBlog
Next Previous
Back